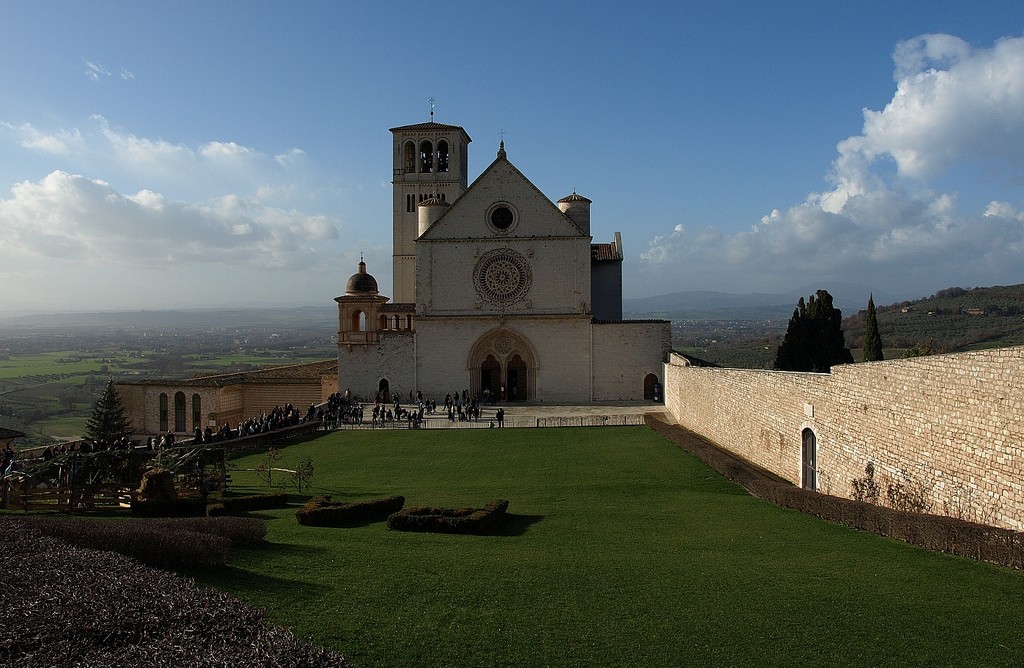 Assisi is probably the most popular of Umbrian destinations being the birthplace of St. Francis, patron Saint of Italy.
His powerful preaches and prays renovated the Catholic Church in 13th century and recently inspired the newly elected Pope Francesco I who decided, for the first time in the history of Catholicism, to bear the name of the Umbrian friar who preached poverty.
The town has very ancient origins: it has been most probably erected by Umbrian populations and was in strict contact with the Etruscans before passing under the Domination of Rome in III century b.C. bearing the latin name of Asisium. After the fall of the Roman Empire it became a stronghold of the Goths and passed also under the Byzantines. In XII century became an independent town and fought against Perugia. Became part of the Lombard Duchy of Spoleto and finally under the Church.
Its actual aspect is mainly medieval although many traces of the Roman structure are visible.
The most important building in town is doubtlessly the imposing St. Francis' Basilica, consisting of two churches built one above the other, where masterpiece frescoes of painter Giotto and his apprentices representing the life of the Saint can be admired.


The main square stands above the former Roman Forum, which floor and ruins are still visible with an interesting underground visit. On the square is located a former Roman Temple dedicated to Minerva, with an elegant colonnade, whihc has been converted into a Catholic Church.
Other beautiful and important churches are San Rufino (former Cathedral before the times of St. Francis) and St. Chiara.
Further sites of the pilgrimage following the life of St. Francis are located out of town: among them St. Damiano, l'Eremo delle Carceri hermitage and the Baroque imposing basilica of St. Maria degli Angeli built around the Porziuncola, the tiny chapel where St. Francis died.
The ciy is dominated by the massive ruins of the Rocca, a fortress built to control the city and the surrounding lands.