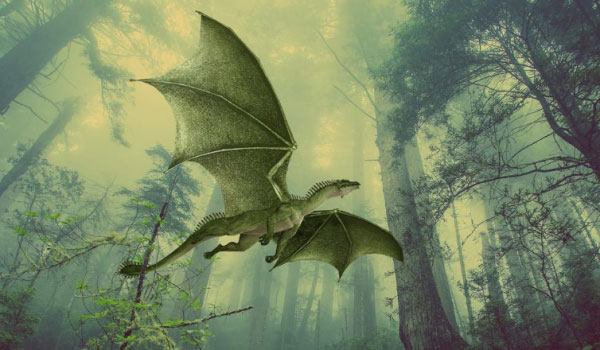 Fantastic creatures and where to find them

Imagine a very long ridge of a dragon that runs through Italy from north to south, a huge dragon living in the waters of the Mediterranean: welcome to the Apennines.
The Apennines are the ancient ridge of the peninsula made up of "soft" mountains whose peaks do not exceed 3,000 metres.
But it is precisely in this ancient landscape made up of plateaus, woods, ancient villages and unexplored corners that you "meet" strange creatures!
Between Tuscany, Umbria, Lazio and Abruzzo there are so many legends about fantastic creatures that they go crazy.
Near Florence, at Pratolino, in 1580 the artist Giambologna created an extraordinary sculpture 14 metres high: the Giant of the Apennines that is crushing a dragon.

It is only the first of the many dragons or reptiles that populate the waters, woods and caves in the mountains. In Valnerina goblins, like the Gnephro of the Marmore Falls, nymphs, fairies and sibyls are at home, but beware!
Some of them can turn into snakes as in the case of Melusina: a river mermaid with a snake tail!
The nymph Porrina, standing on the river Corno near Cascia, seems to hold a snake in her hand and flowers in the other. It seems that it was she who announced the arrival of Santa Rita who, like her, was able to heal the sick and kill snakes.
The ability to enchant snakes, make magic and medicinal herbs also belong to the Goddess Angizia who lives in the sacred wood of Luco in Abruzzo. In honour of the ancient Marsican Goddess and her relationship with snakes, every year in Cocullo the snake procession is celebrated.

Did you know that St. Anatolia of Narco, whose name evokes mysteries of the East, killed a snake-dragon?
In the Abbey of San Felice and Mauro, right in Sant'Anatolia, is represented the huge dragon with wings that lived under the church, near the river, and that was beheaded by Felice, the hermit monk from Syria.
In the ancient necropolis of Piazza d'Armi in Spoleto, in the tomb of the kings, four bronze sceptres with mysterious dragons engraved on them and other fantastic creatures were found. Mysterious representations can also be found in the Longobard Abbey of San Pietro in Valle near Ferentillo where the Norse represented Odin (or Saint Michael) in a hero capable of facing the dragons of the Valnerina with his sword.

The greatest dragon hunter is undoubtedly St. Sylvester who lived not by chance on Mount Soratte: a magical and isolated mountain between Rome and the Apennines.
St. Sylvester defeated numerous beasts like the one in the Tancia cave, the one in the cliff of Morro Reatino both in the province of Rieti and the one in Fornole di Amelia which dedicated a church on top of a hill near a cave to the Saint.
A stolen work, of which unfortunately only one photo remains, previously conserved in the church of San Tommaso in Terni, represented the slaying of a dragon by San Silvestro.
And just Terni, the ancient interamna, seems to have been born after the killing of a water dragon that infested it and with its stench it made the air smell. It is not by chance that the symbol of the city is the Thyrus of Terni.

A case of history and ancient traditions: Gubbio and its "madmen"