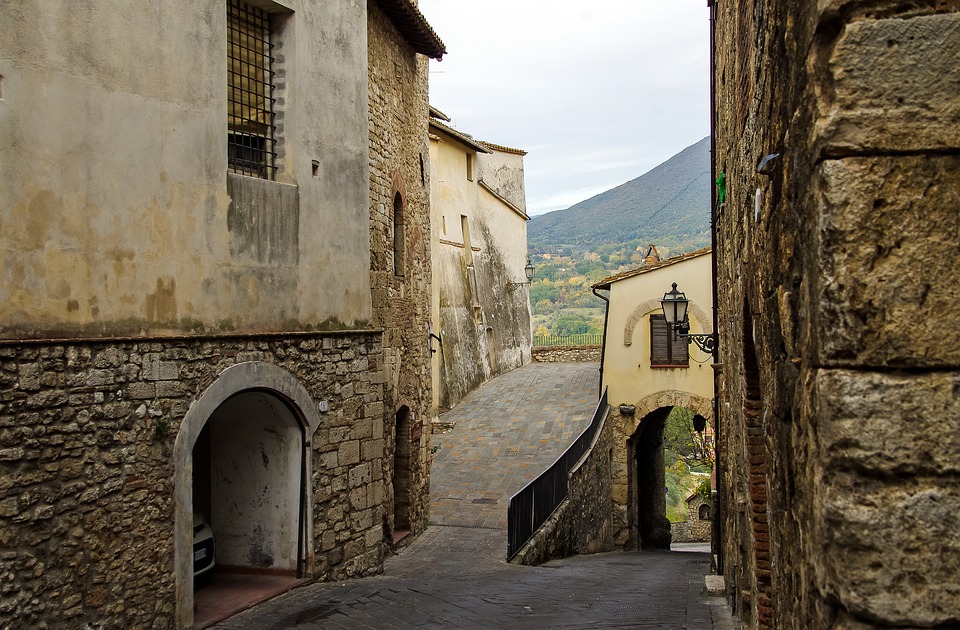 Characteristic medieval village built along the Via Consolare Flaminia, certainly inhabited since Roman times as evidenced by the remains of the funerary monument located at the intersection for Terni and Narni, the mosaic floors of the patrician house and the two environments commonly called "Roman cisterns" by the Court.

Its history is closely linked to the nearby town of Carsulae, whose inhabitants, to its abandonment, seems to take refuge in what was probably already a small settlement located in the highest part of the hill coinciding with the current streets of the Rocca and Court, giving rise to a new center by the name of Casventum.
The first reliable source is the document of 1036 for the foundation of the Abbey of St. Nicolò.
It suffered the invasion and the Lombard power and was disputed by the nearby cities of Todi and Narni. He entered the orbit of the Papal State and gained independence thanks to Pope Innocent III, then becoming a free Municipality with all its magistracies and administrative institutions. In 1530 it was given in fief by Pope Clement VII to the brothers Ferdinando and Giovanni Antonio Orsini.
In 1590 the Castle of San Gemini was elevated to the Duchy and subsequently passed to the dukes of Bracciano who in 1720 ceded it to the Prince Scipione of Santacroce.
At the end of the 18th century, during the Roman Republic, it became part of the Department of Clitunno with the capital Spoleto.
During the I and II Restoration it underwent numerous modifications. During the II Roman Republic of Mazzini and Garibaldi, the city, at the passage of the latter in July 1849, dedicated a plaque to it next to the Porta Romana.
According to the legend, San Gemini takes its name from a Benedictine monk "Yemine" who arrived from Syria in the ninth century, performing evangelization work and to whom the city showed gratitude and devotion by taking him to Saint Protector "San Gemine" which is still celebrated today. October, the period in which the historical re-enactments of the "Giostra dell'Arme" take place in his honor.

Built as an agglomeration around a Roman domus along the Via Flaminia, it acquires the conformation and dignity of the city around the year one thousand when walls and access gates are built. Expansion and modernization of the village were made especially in the fourteenth and in the eighteenth century.

The town has always kept intact the charm of the small medieval village and a walk through its narrow streets offers enchanting views in an atmosphere where time seems to have stopped.

Among the main buildings the Vecchio Palace or Pretorio Palace, a civil building where the assemblies of the lords of the city were held in medieval and Renaissance times, the church of St Francesco, built in honor of the poor of Assisi following his passage into the city, the Church of San Giovanni, with its precious Romanesque portal, and the Abbey of San Nicolò, located just outside the city walls, the San Gemini building of which there is the oldest documentary evidence.

Inside the private garden there is a paving of the Roman domus around which the center developed. Finally, the Guido Calori Museum deserves a visit, which houses inside a sixteenth-century cloister the works of a sculptor and Roman very well known especially in the first half of the twentieth century.

The medieval town of San Gemini is part of the circuit of the most beautiful villages in Italy and the Slow Cities club linked to the Slow Food project.