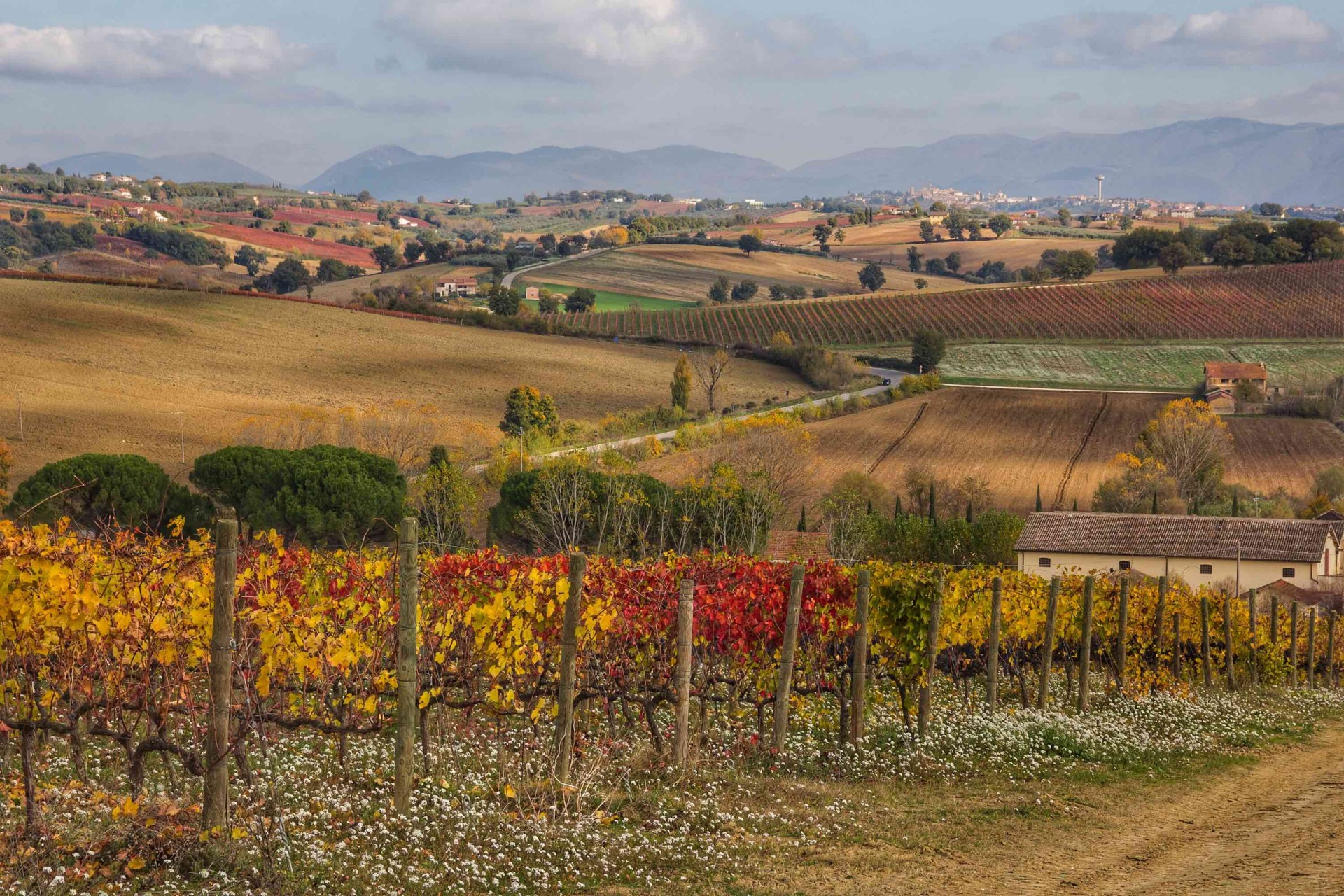 SAGRANTINO OF MONTEFALCO
From the Greeks through the Etruscans to the Roman wines produced by the precious and mythical Itriola grape mentioned by Pliny the Elder in his Naturalis Historia, the territory of Montefalco derives its origins from the beginning of the history of the Italian peninsula.
Nonetheless, it seems that only a few years later, around the middle of the 15th Century, some Franciscan friars brought the vine from Asia Minor, replacing the local crops, probably of Sangiovese. This vine would be named Sagrantino, because of the sacred function of the wine cultivated by the friars.

1549: THE FIRST GRAPE MUST PURCHASE ORDER OF SAGRANTINO - Although documents regulating and protecting vines of Montefalco date back to the 14th Century, the first document mentioning an order of Sagrantino grape must in Montefalco dates back to the 16th Century by Guglielmo, a merchant of Trevi. In a subsequent sharecropping contract it refers to "four pergolas of Sagrantino" existing in the land sold.

Also in those years there is a special provision of the City that established the official date of harvesting in September: an event that is valid until our days, thanks to the Confraternity of Sagrantino, is commemorated every year with an event that attracts locals and tourists.

1622: SACRALITY OF SAGRANTINO - From the 17th Century an ordinance of Cardinal Boncompagni, legate of Perugia, who sentences with the gallows who has been caught in the act of cutting a vine of Sagrantino

1972: THE SECRET SAGRANTINO - At the beginning of the last century, Montefalco is defined as the excellence of wine in Umbria and it is only a few years after the production of dry Sagrantino starts instead of the traditional passito one.

THE SAGRANTINO OF MONTEFALCO
The Sagrantino di Montefalco DOCG passito or dry wine is produced by the homonymous autochthonous vine, as well as in Montefalco, in the Umbrian towns of Bevagna, Gualdo Cattaneo, Giano dell'Umbria and Castel Ritaldi for a total of only 660 hectares.

MONTEFALCO SAGRANTINO DOCG - It's a wine with a great structure obtained exclusively from Sagrantino grape. Thanks to the great variety of polyphenols and tannins, this wine has an incredible longevity. A mandatory aging of at least 33 months is required, with at least 12 months in oak barrels followed by a refinement of at least 4 months in the bottle.

It can be served with grilled meats, brown sauces and game meat. Serving temp: 18° C.

MONTEFALCO SAGRANTINO PASSITO DOCG - From the homonymous vine, passito is also obtained. The bunches are carefully selected and placed on racks for at least 2 months. Then it's vinified by fermenting the must with the skins. In this way a particular passito wine is obtained because, although sweet, it remains dry due to its tannic value.

It's a meditation wine, it goes well with aged cheeses or dry desserts with dark chocolate and dried fruit. Serving temp: 12° C.

THE TERRITORY OF MONTEFALCO
Perched on a hill overlooking the valleys of Clitunno, Topino and Tiber, Montefalco is recognized as one of the most beautiful villages in Italy. For this reason in 1452 Benozzo Gozzoli portrayed it in the famous fresco in the Basilica of St. Francesco in Assisi dedicated to the Preaching to the Birds.

HISTORY OF MONTEFALCO - Already in Roman times its salubrious and high places made it an attractive holiday resort for wealthy Roman gens, including that of Marco Curione, who seems to have given the first name to the town that until 1200 was called Coccorone. Nothing is known of its history until the 13th Century, when Frederick II devastated the fortified settlement that resourced with the modern name of Montefalco.

Then the alternating events between Papato and the Ghibelline Foligno as a free commune led it to submit to the power of the Church State so much so that in the 14th Century the Albornoz began in Montefalco its work of reconstruction of the Papal State.

MONTEFALCO TO SEE - The city is considered one of the focal points of Umbrian painting and the Church of St. Francesco (14th Century - the Museum with sections dedicated to the former church, with the works of Benozzo Gozzoli, Perugino and other frescoes by the Umbrian school, the picture gallery with paintings by Francesco Melanzio, Antoniazzo Romano, the crypt with archaeological finds and various works of art).

A unique area to experience, a town to visit and taste, maybe together with us on our gourmet itineraries, along the Via del Sagrantino wine that has become a symbol of the excellence of the enogastronomy of Umbria. 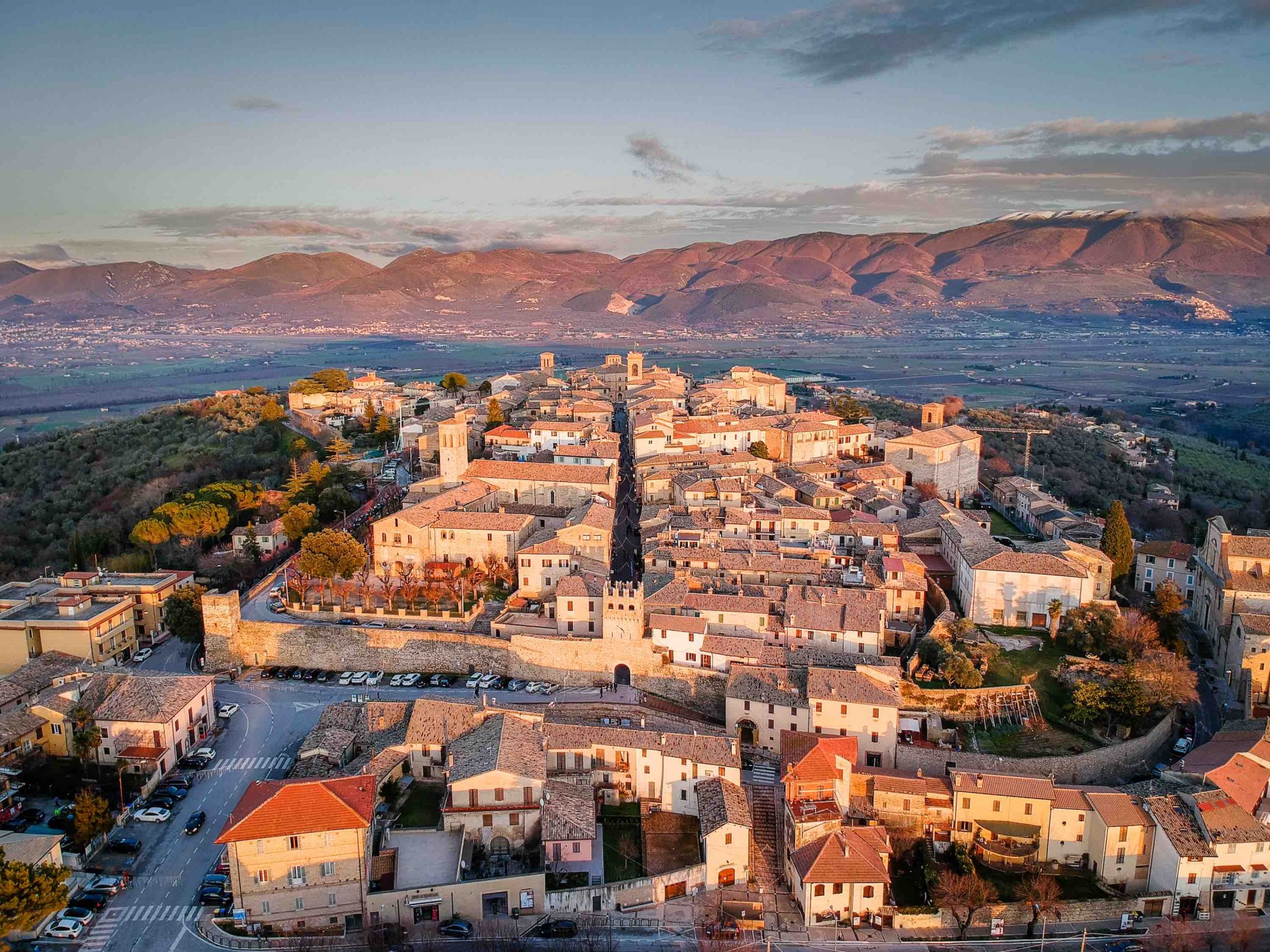 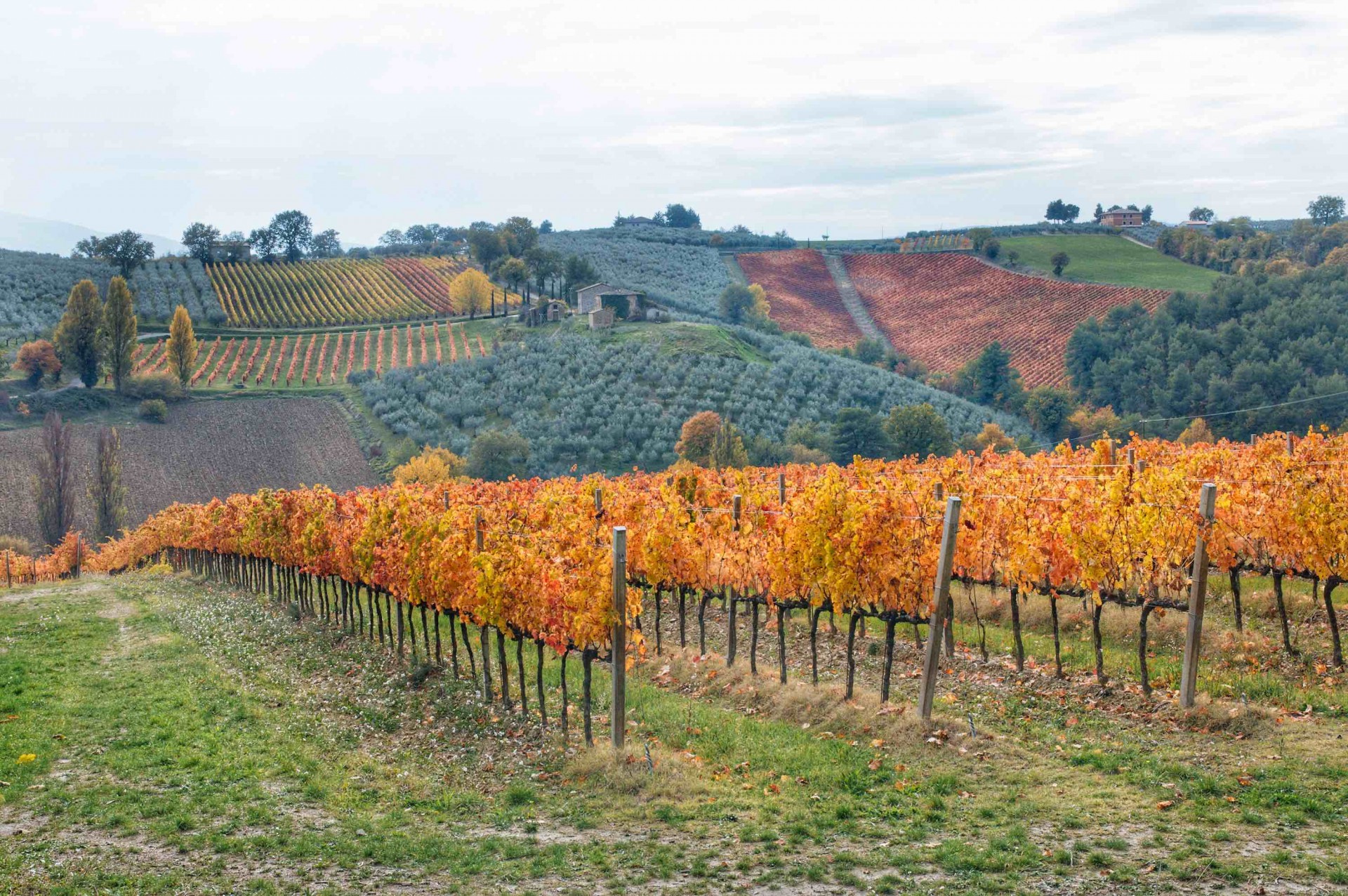 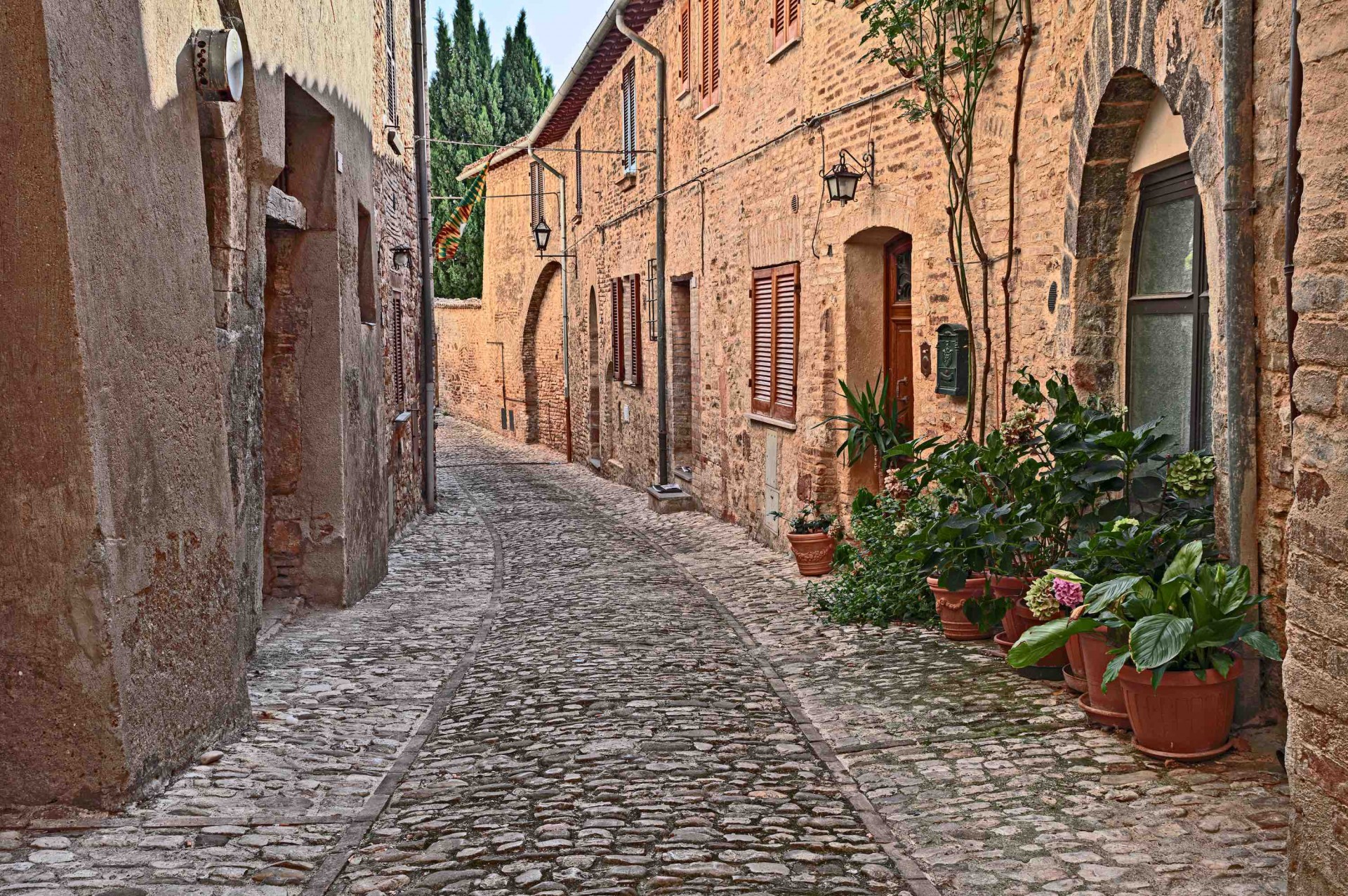