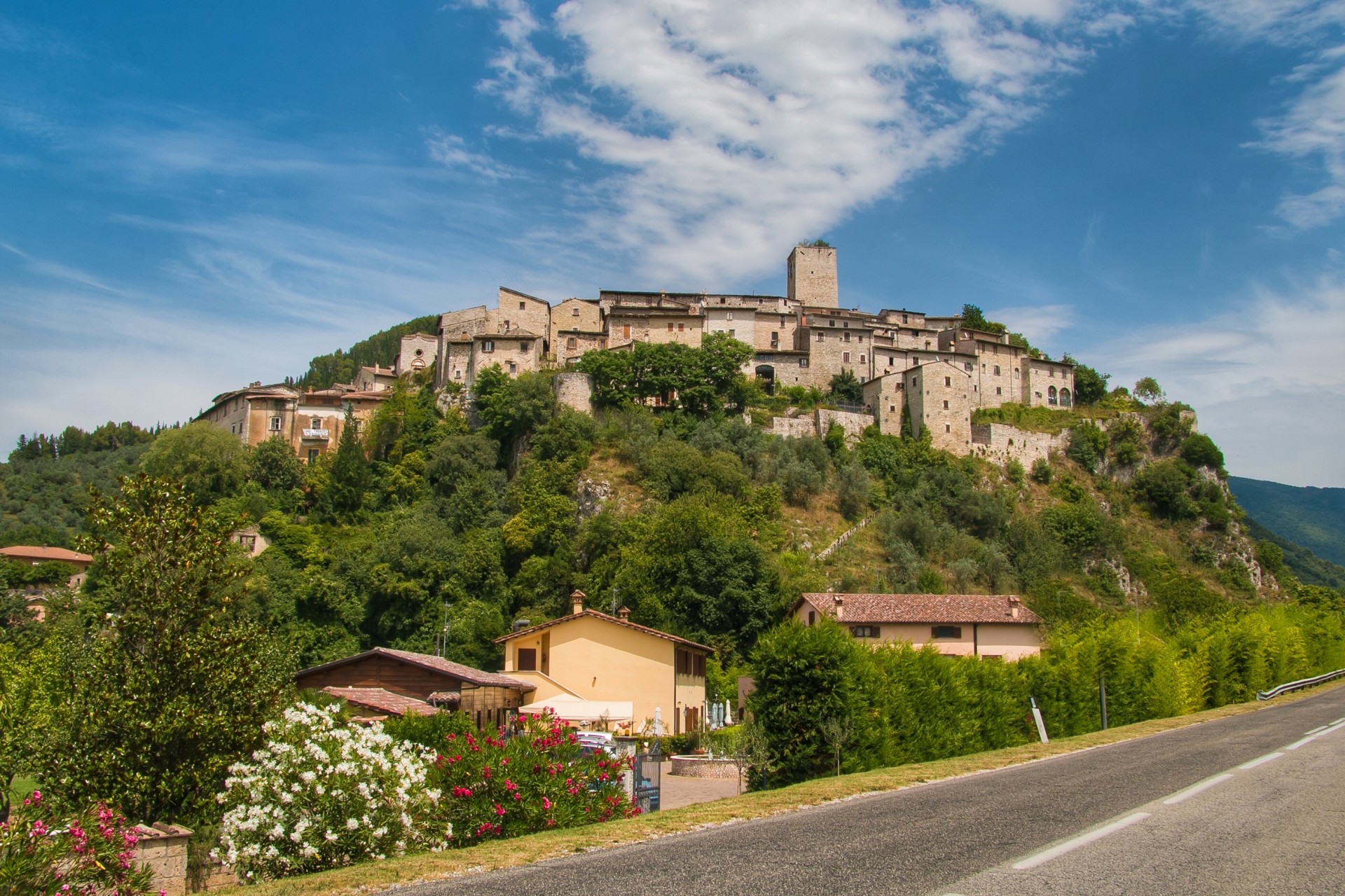 Strategically placed to dominate the left bank of the Nera River on an ancient road that runs along the slope of the water, Arrone, a splendid village in Umbria, has very ancient origins.

The tradition and some documents found by the historian Ludovico Iacobilli in the archives of the Abbey of Subiaco, Farfa and Ferentillo, reports the foundation by the powerful Family of the Arroni, who built in the 9th Century the characteristic fortress. Guarded by circular ramparts, it is still today the symbol of "La Terra" as the oldest settlement of the village is defined.

The castle is embraced by imposing walls and is crossed by a main street that leads to the main square, where the gothic church of St. John the Baptist is beautifully decorated with a series of splendid frescoes from the 15th Century. Leaving from "La Terra" you enter the other modern part of the village, the Santa Maria quarter with renaissance noble buildings that takes its name from the 16th Century Collegiate Church of Santa Maria Assunta.

FROM UMBRIANS TO ROMANS - The most ancient attendance is confirmed by findings of votive bronzes on the Mount of Arrone, which attests the existence of an Umbrian Sanctuary on its summit, also reaffirmed by a large rectangular cut in the calcareous rock ocre meters, filled by debris and not yet investigated.
The position of the mountain sanctuaries, never casual as described in the eugubine tables, can be traced back to their value of (visible) points of religious and political aggregation of the populations that lived in the valley. As we can deduce from the sources that tell about the construction by the Consul Curio Dentato of the Via Curia and in 271 B.C. of that wonderful "cut" that today we call Marmore Waterfalls, the territory passed around the beginning of the 3th Century. B.C. under the influence of the Romans and so it happened that these sanctuaries, where the local divinities were often assimilated to those of the Latin cult, still remain important: some anatomical terracotta ex-votos are preserved today in the municipality, such a female marble head found at the end of '800 in loc. Sacrata Valley at the foot of the mountain, along with other artifacts such as a seal, a travertine stone and an epigraph found at the Church of St. Lorenzo in Tripozzo.

FROM THE MIDDLE AGES TO THE MODERN ERA - The domination of the family on the middle Valnerina lasted until the 13th Century, when the Arroni had to submit to the Duchy of Spoleto losing autonomy and prestige. It was only in 1347 that Arrone became a free municipality, even if in 1527 the entire territory will suffer the looting of the military returning from the Sack of Rome. In 1860 it became part of the Kingdom of Italy with prestigious first mayor, the captain of Garibaldi, Gaetano Turchetti.

SPORT AND NATURE
The green areas of Umbria are exalted in Arrone, surrounded by the Nera River Park which means nature, sport and places of uncontaminated beauty.
Canoeing, rafting, canyoning and all kinds of river water sports merge with trekking, which goes beyond the Valserra Park and the other territories of Terni, as well as mountain biking for a territory that can be effectively described as the home of outdoor sports.

We are waiting for you!