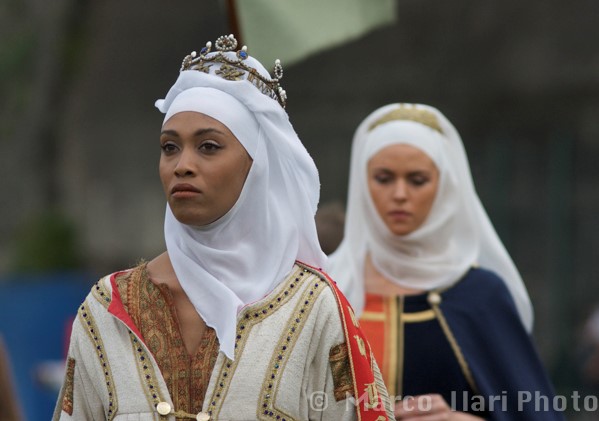 From the end of April to the second Sunday of May, the charming old town of Narni is celebrating. As in 1371, the town has an ancient and evocative atmosphere. Flags, torches, parades, shows, concerts, exhibitions, knightly tournaments, markets, conferences, reconstructions of ancient crafts, ovens and taverns evoke every night the fantastic medieval face of Narni.

This is the Race to the Ring of Narni, a festival dedicated to the patron saint of youth and now become the brand of the city, achieving increasingly ambitious goals that have made it distinguish in the varied world of medieval re-enactments of the historic villages of the Peninsula.

In the two weeks preceding the second Sunday of May, when the long-awaited equestrian joust takes place, the city wears the clothes of the Middle Age and like in a time machine, catapults its atmosphere and its streets in 1371, the year which is inspired by the feast of the patron.

The tradition is maintained in the spectacular historical race that takes place on May 3, the day of the patron, in the Piazza dei Priori. The real Race to the Ring, however, presents modern rules and is disputed at the San Girolamo stadium on the second Sunday of May in a growing pathos that makes the hearts of the contradaioli on the field and in the stands.

The three Tertiaries who contend for the silver ring are Mezule, which presents the white colors, Fraporta, with the reddoblu and Santa Maria colors, from the purple orange banner.
The rivalry of the districts that are located in the part "de sopra" (Mezule), "de mezzo" (Fraporta) and "de sotto" (Santa Maria) with respect to the historical centre, animates the whole festival.
We do not stop at the only competitive event, ranging from medieval days to the performances of artistic and cultural groups, exhibitions and reconstructions of medieval settings in the streets and squares. Among ancient crafts, torches and flags, the festival becomes even more magical, with a particular emphasis on gastronomy, with the typical taverns that feature menus with typical local products.